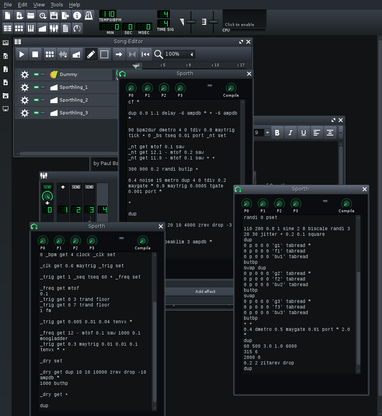 This post is a brief reflection about the efforts I took to get Sporth running as a native LMMS effect plugin.

Over the past few years, my compositional process has broken away from the DAW to follow what I would call a first-priciples "bottoms-up" approach to sound generation. It all started with a curiosity of how Csound worked under the hood. This led to the creation of Soundpipe, which implemented DSP at the inner loop level. This then lead to the builing a language abstraction for Soundpipe called Sporth. The natural progression is to build abstractions around Sporth now, which I believe will involve visualization, and graphical user interfaces.

The idea to put Sporth up in a DAW stems from an internal compromise I have made with myself. A part of me has often wanted to build a DAW from scratch, but another part of me has also realized the huge amount of work it takes to build a usable DAW when you are just one person. The middle path is to not reinvent the wheel and find existing software that can be built around my ecosystem of existing tools.

LMMS is a DAW for Linux that I've known about over the years.

I first used it seven years ago for my high school senior year project. My project was survey of the various music software for Linux available at the time.

LMMS has much potential for growing into an application which rivals major commercial competitors. At the moment however, the application is still glitchy and can use some optimization for more flexibility on older hardware. Despite these faults, it is still an excellent start for beginning Linux musicians who do not want to spend their life learning about how music technology works, and just want to get started making music. This program is especially good for musicians used to making tracks in Fl Studio because of its unmistakable resemblance to the software. It is in my prediction that in five years, LMMS will become one of the best digital audio workstations on the Linux Platform.

Indeed, seven years later, LMMS has gone through some incredible changes. In recent years, both the UI and the website have undergone a complete makeover, giving LMMS a very modern look. Along with the looks, LMMS has seem to have made many many bugfixes and improvements and the user experience feels totally different from what I remember. LMMS in 2017 has a very active community of users full of individuals very enthusiastic about Linux and music production. It's very cool to see.

Nostalgia aside, LMMS has a few great things in particular that I like. Features like automation curves, timeline editors, thoughtful UI design, and native plugins/synthesizers are parts of wheels I don't have to reinvent. LMMS compiles without trouble on my Slackware machine, and any software capable doing that is worth looking at. LMMS is open source, which makes it ripe for some tasteful, which is how Sporth got to be in LMMS to begin with.

LMMS has enough plugins implemented that I was able to code by example. I was very fortunate to have someone else writing a plugin with a very similar idea, so that make things even easier.

The Sporth plugin is implemented as an effect plugin. Currently, it has the following features:

Things work pretty well for the most part, but there are a few quirky things to deal with. The recompilation control is a bit of a hack, it is implemented as a two state knob instead of a button to make it work properly with automation. When the button goes from the 0 to 1 state, it recompiles the Sporth code. The other weird thing is that since Sporth is an effect, it will only kick on when a signal is given to it. You'll need to make sure some kind of audio is going into it. In my LMMS projects, I have a dummy synth that plays a note into them, with automation that tells Sporth to recompile itself at the beginning. When I start up LMMS, I have to hit play twice to get Sporth to run. After that, Sporth stays on indefinitely.

Since playing around with LMMS and the LMMS sporth plugin, I've come across a few unintended pleasant outcomes:

LMMS, once spawned, "stays" in the current directory, which means Sporth is able to load samples, sporth plugins, and other external things. This could potentially be a great way to indirectly extend what LMMS can do!

The ability for Sporth to recompile itself is actually a feature that Sporth is currently unable to do by itself, so it's a nice thing to have in the LMMS editor. One thing I've been able to do is hook up a button from my f310 controller to recompile Sporth.

Thoughts for the future

The main thing I want to do now is to just use the damn thing and get more familiar with the LMMS workflow. My hope is that this could be a new set up for my Sporthlings, which is currently a live coding setup in Vim.

One idea I had was to build a native LMMS instrument that spit out MIDI note number gate signals, and to couple that with Sporth to build monophonic synthesizers.

I could add more than 4 knobs to Sporth, but four seems to be plenty for my brain to handle at one time.

LMMS-Sporth is built separately from LMMS, which is perhaps the most important thing about this whole project. My hope is that eventually other LMMS developers will develop plugins in this way. It is much faster to build a plugin separately from the LMMS codebase, and could pave the way for faster prototyping.