Welcome to Part 5 of 9 Ways to NRT

Today, NRT will be used to generate XM files, which are the native file format for the fasttracker 2 inspired music tracker Milkytracker.

The main program used in generating the XM files is libXMT, a Lua library I wrote a few months ago. Using XMT, I wrote a lua script that could parse the output of NRT and write the note information to an XM file.

The cool thing about the XM file format is that it is a self-contained piece of music with a very small footprint. XM can embed samples and wavetable synthesizers inside of itself. Conceptually, it is a lot like a MIDI file with sounds. The script I made programatically creates a squarewave synthesizer that plays the NRT notes.

Using the nrt2xm program, one could use it with NRT in the following way with this bash script:

The NRT program uses the '-F' flag to change the separator from the default comma to a space. This is done so the notes can be sorted chronologically with the Unix command sort before being fed into the lua script nrt2xm

Running this script generates a file called "out.xm", opening it up in Milkytracker gives you a pattern that looks like this: 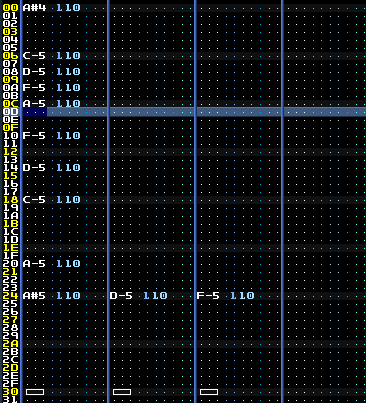 The nrt2xm program, while absolutely functional for basic NRT notation, is definitely proof-of-concept and should be modified for any serious needs.